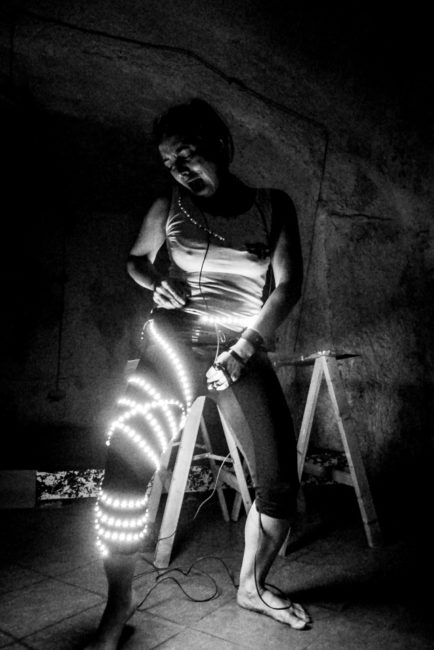 M. Della Morte is on the edge of performance and theater; not belonging to any of the two worlds, she’s been able to develop an original and hybrid formula: research without intellectualism, physicality without smugness, word without self-referentiality. Her poetic is obscure and obsessive; loves the morbid and the horror, sometimes recalling the “actionism”, but spiked in the frame of a very personal research on scene devices and DIY practices, always accompanied by an humor full of paradox.

Since 2006 she was co-founder and director of the informal theater group Laboratorio7, leading many laboratories and realizing theater shows in Italian festivals (Portello River Festival and Giardini Sospesi in Padua, Artènot in Quadrelle, Comicon in Naples) and major contemporary theatre (Nuovo Teatro Nuovo in Naples, Galleria Toledo within the festival “Nuove Emergenze” in Napoli, “Gli Esclusi” in Caserta). Besides the theatrical works, the company started a research on the streets, realizing theatrical performance and actions in Napoli and Bologna.

The group split of in 2010/2011, when the members choose to follow their personal urgencies and path. Since then she has been working as performer, ecountering both actors and musicians, besides other small participation in others’ work. In the same period she started to collaborate to the organization of Altera! Pratiche non convenzionali, an annual festival ran in Naples by a group of artists with different backgrounds. In 2012 she joined another informal group, with the guide of Andrea Saggiomo and Gaelle Cavalieri, this research is ongoing and active nowadays as well as her recently research upon the nude voice.

Since 2012/2013 she is also collaborating with a two-days-festival “Weird Burn Dance” held each end of the summer in Sant’Agata de’ Goti (BN).