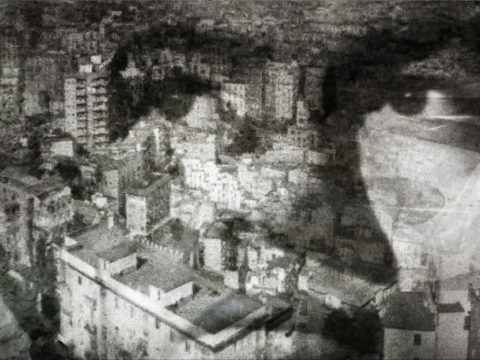 Seppo Renvall is a pioneer in Finnish experimental film and co-founder of the Helsinki Film Workshop in the late 1980s. His films are characterised by an abstract imagery in black and white and a non-narrative structure that often focuses on the apparently commonplace and everyday, the things we tend to overlook, things just behind our shoulder. The rhythmic flow of images is crucial, thus logically connecting image and sound. In consequence, Renvall collaborates widely with musicians, DJs and audio specialists.

Aspec(t) are SEC_ and Mario Gabola from Naples, Italy. Appreciated for their original mix of electro-acoustic detailed improvisation and power electronics/noise visceral attitude, they have played all around Europe and organized hundreds of concerts in their home city. SEC_ plays reel-to-reel tape machine to manipulate sound of different sources and to generate and control feedbacks; Mario Gabola plays his self-built photosensitive system
that interacts with no-input feedback mixing board and with sax. The result is a fascinating and inextricable forest of sounds: frenetic structures, twisted rhythmes, noise explosions, ancestral cries, an unceasing perversion of the soundscape and the time stream. As a duo they have released one LP, three CD’s (two of which in collaboration with swiss composer/performer Dave Phillips and polish drummer Andrzej Zaleski) and various CDr and cassettes. Together or separately they have collaborated with musicians like Jeorme Noetinger, Dave Phillips, Arnaud Riviere, Andy Guhl, Rudolf Eb.er, Agostino
Di Scipio, Olivier Di Placido, Dario Sanfilippo, Scott Sinclair, Andy Bolus, Jean Philippe Gross, C_C and many others.

In 2017 Seppo Renvall and Aspec(t), assisted by video artist Andrea Saggiomo (70fps), work together to the creation of Napoli Film, super8 film composed of tens of hours of shooting between the streets and houses of Naples, reassembled and accelerated to rebuild a frantic journey through the underground and the overground of a city always onthe edge.